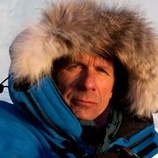 For 35 years, photographer James Balog has broken new conceptual and artistic ground on one of the most important issues of our era: human modification of our planet’s natural systems. An avid mountaineer with a graduate degree in geography and geomorphology, James is equally at home on a Himalayan peak or a whitewater river, the African savannah or polar icecaps. James has become a global spokesman on the subject of climate change and human impact on the environment. He founded the Extreme Ice Survey (EIS), the most wide-ranging, ground-based, photographic study of glaciers ever conducted. As a consequence of this historic work, in 2009, he served as a U.S./NASA representative at the United Nations Conference on Climate Change (COP-15) in Copenhagen. In 2015, at COP-21 in Paris, he made numerous presentations on behalf of the Natural Resources Defense Council (NRDC), The United Nations Foundation and Solutions COP21 at the Grand Palais. Balog and the EIS team were featured in the 2012 internationally acclaimed, award–winning documentary Chasing Ice and in the 2009 PBS/NOVA special Extreme Ice. Chasing Ice won an Emmy Award in 2014 and was short-listed for an Oscar. It has been screened at the White House, in the U.S. Congress, in the U.K. House of Commons, and at the United Nations. It has been the subject of features on the NBC Nightly News, ABC Nightline, The Late Show with David Letterman, PBS’s Moyers & Company, and Real Time with Bill Maher. National Geographic showcased the Extreme Ice Survey in 2007, 2010, and 2013. Mr. Balog has given multimedia presentations about the project at TED and at dozens of major public institutions including the White House, the U.S. Congress, NASA, the Environmental Protection Agency, Apple, Swarovski, the 2010 Winter Olympics, North Face, Qualcomm, the Bloomberg New Energy Financial Summit, Cornell University, and Duke University. James has been honored with many awards. In recent years these include the Royal Photographic Society Hood Medal, the Heinz Award, the Duke University LEAF Award, the Sam Rose ’58 and Julie Walters Prize for Global Environmental Activism at Dickinson College, an Honorary Doctor of Science Degree from the University of Alberta, the International League of Conservation Photographers (ILCP) League Award, and the American Geophysical Union Presidential Citation for Science and Society. Balog was a keynote speaker at an environmental philosophy conference in Istanbul sponsored by the Ecumenical Patriarch of the 300 million-member Orthodox Church. The most recent of James’ eight books is ICE: Portraits of Vanishing Glaciers, published by Rizzoli in 2012. Among his other titles are Tree: A New Vision of the American Forest (2004) and Survivors: A New Vision of Endangered Wildlife (1990), hailed as a major conceptual breakthrough in environmental photography. His work is in dozens of public and private art collections, including the Museum of Fine Arts Houston, the Corcoran Gallery, the Peabody Essex Museum, the Denver Art Museum, and the Gilman Paper Company.