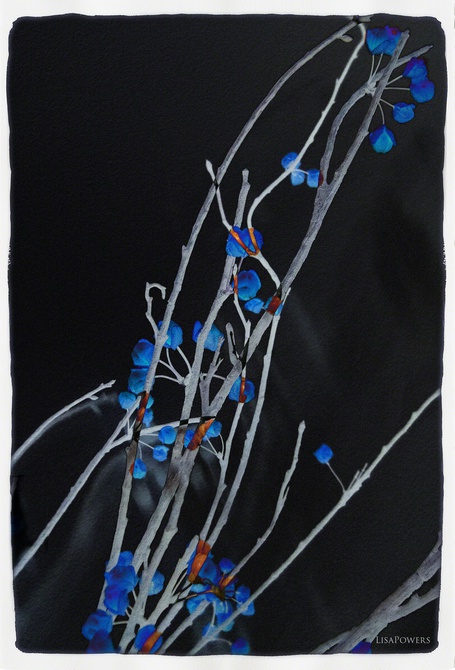 Title
"Blues on a Branch"

Title
"Blues on a Branch"

Create a series of greeting cards for an up-market florist/gift store.

Photographed various flowers in close-up, and created a story around the blues.

A series of 8 images in shades of blue, simulating Cyanotypes, hand-printed and signed greeting cards. 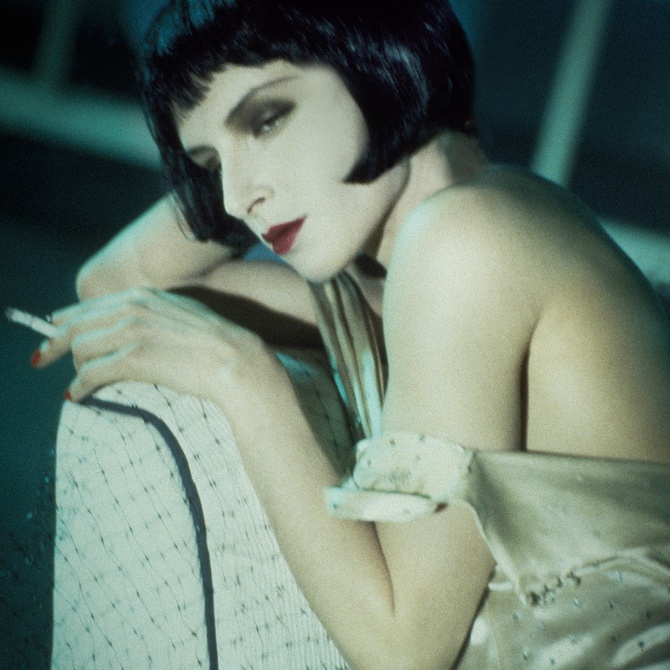 Create a look in the style of 1920's silent film actor, Louise Brooks.

Shot in-studio with blue lighting to give a silvery film look. Shot with 35mm Ektachrome film. 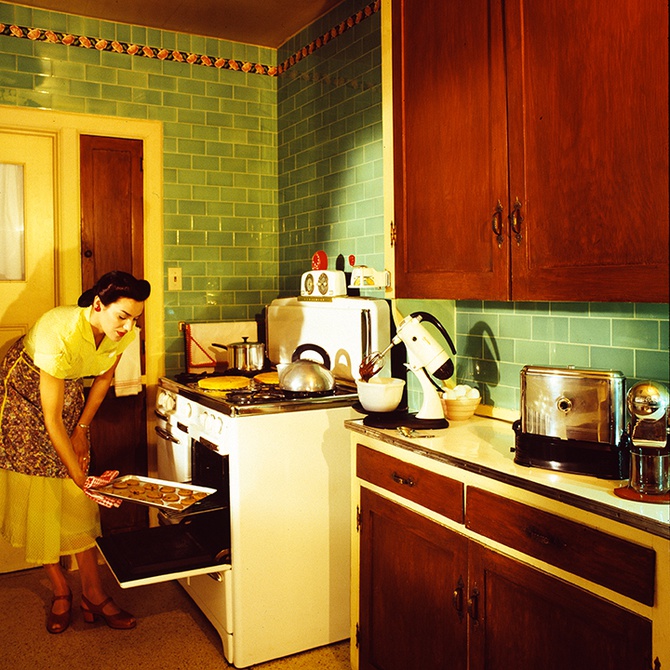 Found a house built in the 1950's that had not been renovated, and hired a model to pose as the American housewife with many vintage kitchen appliances on the counters. This was the first time a model was used in an Art&Antiques feature article.

Created a photo-story using a vintage colour palette in a style similar to advertising images of that era. 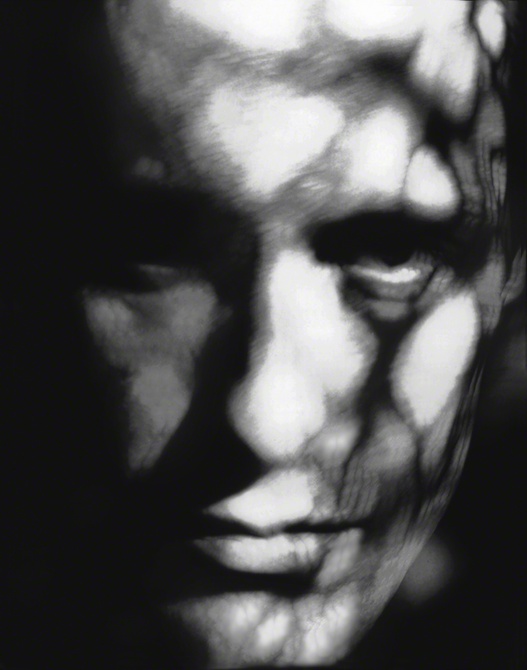 Personal project, photographing my friend with chain link shadows on his face.

A strong portrait that is both compelling and mysterious. 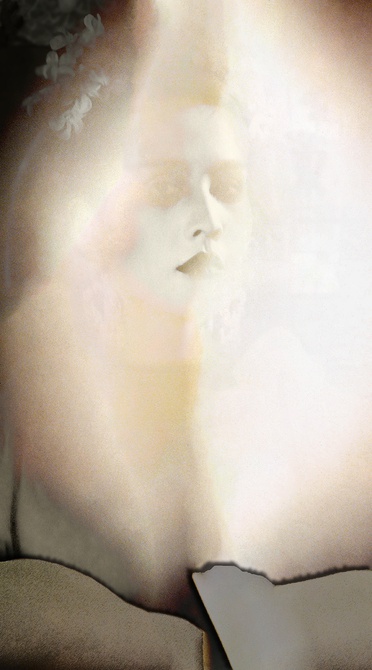 Create a poster for the silent film, "Les Vampires" as a personal project.

Continuing my obsession with vampires! I worked many hours and nights on this to get the right look of an apparition in a glass or mirror with the right vintage-film age look, as though it could have been a frame from "Les Vampires" a 1915–16 French silent crime serial film written and directed by Louis Feuillade, set in Paris.

A creepy, vintage-look for the poster art! 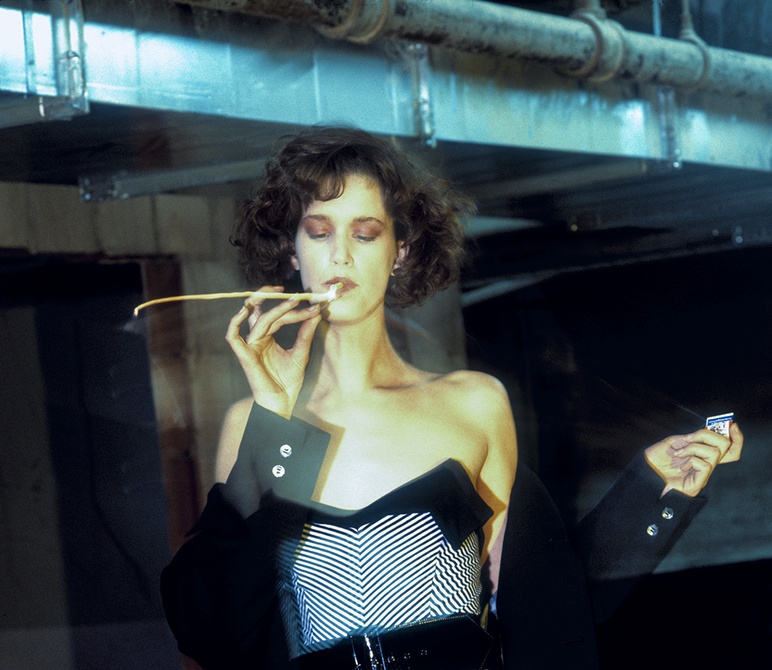 Slow shutter speed resulted in a blurry movement as model lights her cigarette. 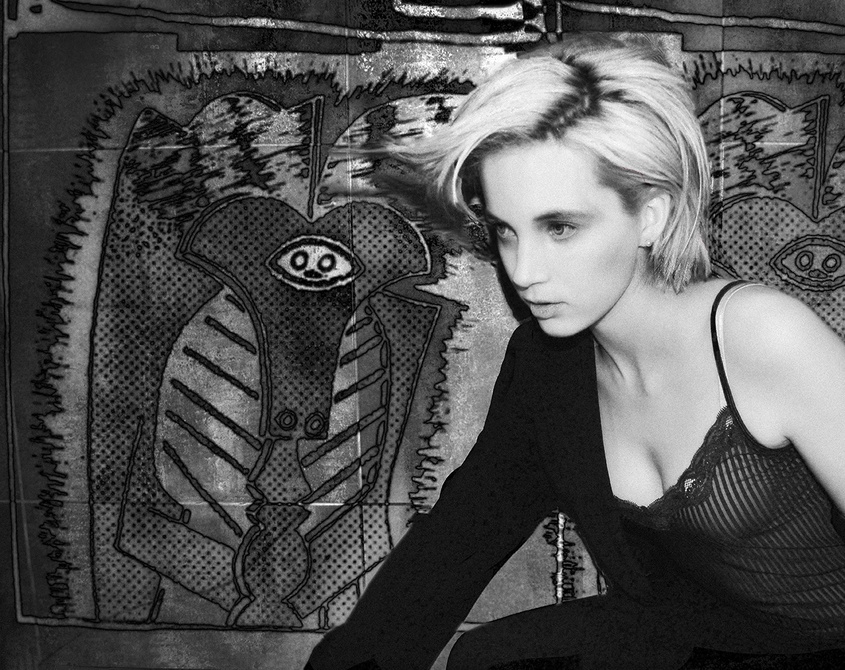 Client wanted a grunge/punk look for this photo shoot to focus on artistic hair colouring techniques.

I photographed the model in black & white to accentuate the "dark roots" look and placed her against graffiti artwork by the amazing artist, Gary Panter, to complete the grunge/punk look. 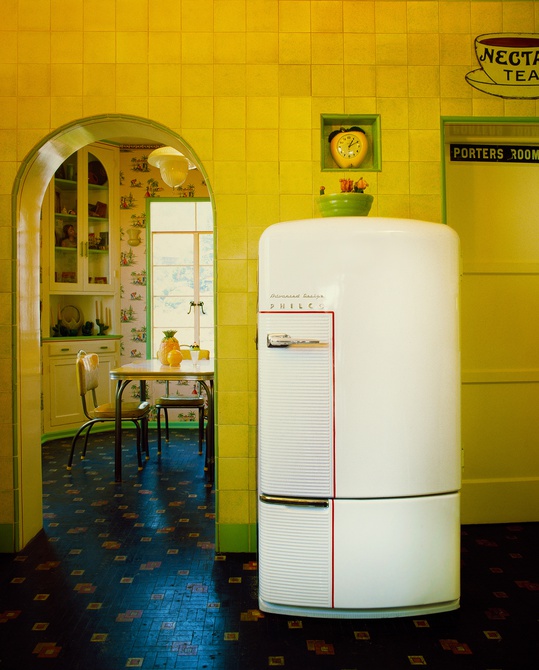 Editorial assignment for Art&Antiques magazine featuring retro style interior with all the 1940's touches, trimmings and appliances. Absolutely everything was authentic 1940's, even the cabinet pulls!

I photographed the fridge with the dinette showing through the archway. I took long exposures on film using my Pentax 6x7 camera. The kitchen was absolutely amazing and I wanted to capture it as authentically as possible.

The focus is clearly on the beautiful vintage Philco fridge, but just beyond I captured the graceful archway entrance to a perfect 1940's dinette set and custom cabinets. I was glad to see detail in the bright-white fridge as well as the very dark linoleum floor. 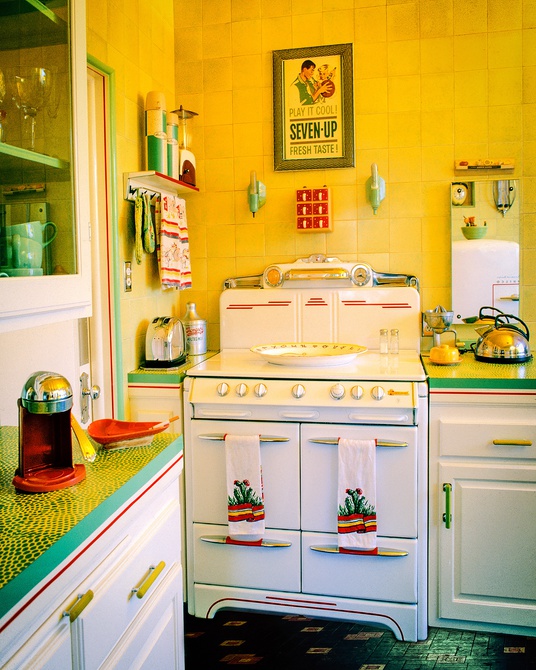 I photographed the kitchen with film, using my Pentax 6x7 camera, taking long exposures instead of using strobe lights. I wanted to capture the kitchen as authentically as I could.

I was happy to see that I hadn't accidentally missed seeing myself in the many reflective surfaces in the kitchen.

Editorial assignment for Art&Antiques magazine: to photograph the studio of Paul Cézanne in France.

Upon arriving at Cézanne's studio at the appointed time and day, which had been chosen because it was a day when the studio would normally be closed to the public, we were met by a care-taker who refused us entry. Clearly, she had not been advised of our arrival. Fortunately, I speak French, and after some persuasion, we were admitted inside. The studio had been left exactly as it was at the time of Cézanne's death, and I was not permitted to touch anything nor even open the drapes for some daylight. I removed my shoes, wrapped soft towels around my tripod feet, and navigated carefully around the studio taking many long exposure shots. I shot film with my Pentax 6x7.

I was pleased to see that I captured Cézanne's golden pallet colours, and I stitched images together for a triptych to show as much of the studio as possible. 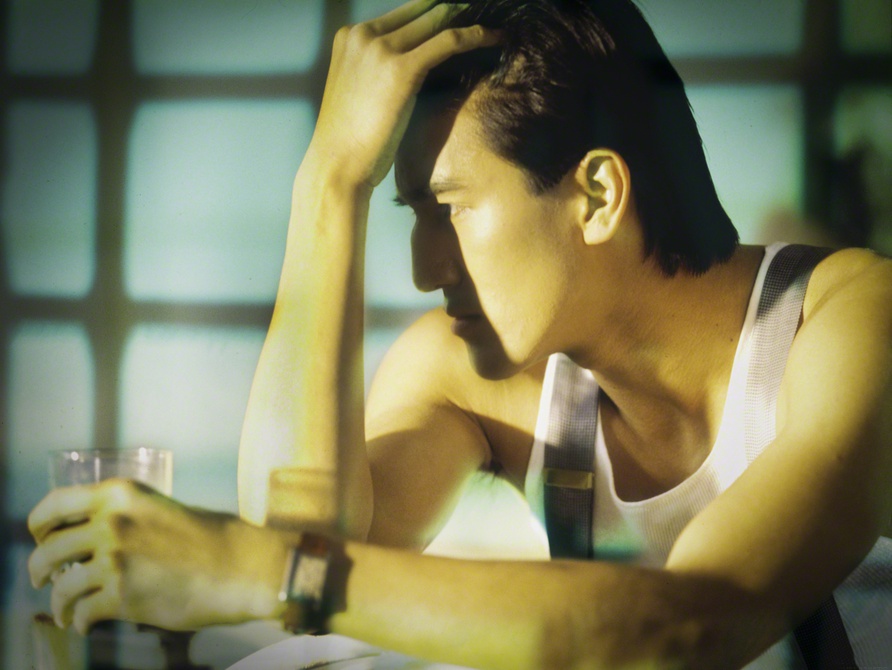 I was asked to set up a studio demonstration by American Photographic Artists (APA) for student members. This image is from that demonstration.

I booked two fashion models, both Chinese, to create a Chinese "Film Noir" scene. I knew that there was no such genre as 'Chinese Film Noir' as the Chinese Communist Party was forbidding many artistic endeavours, so I decided to direct a 'Chinese Noir' film in stills in my studio.

I was able to show the students how I approached a scene set-up with lighting, models, props, and direction. I shot film for the demonstration, both black & white and colour. I demonstrated how lights have colour temperatures that can be used to create an interesting "pallete" on daylight film. 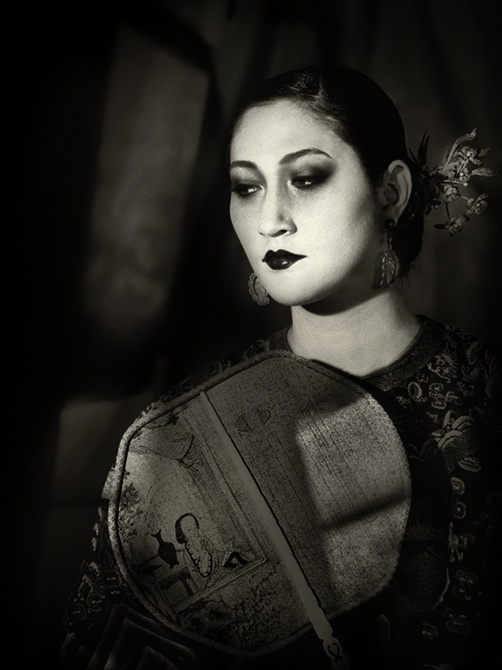 Editorial assignment for Art&Antiques Magazine featuring accessories from the Qing Dynasty in China, which ended in 1912.

The focus of this image was the delicately hand painted paper fan. I photographed this on film in my New York studio. Originally shot in colour, then scanned to digital and converted to monochrome.

The monochrome photographic art clearly delineates the fine line drawing on the fan in contrast to the brightly lit face of the model. 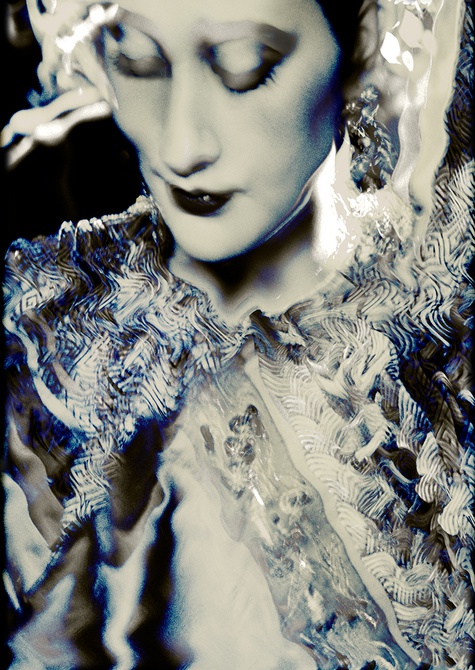 Editorial assignment for Art&Antiques magazine featuring the heavily embroidered garments of the Qing Dynasty which ended in 1912.

I experimented with many combinations of mixing my film photograph of the garment with digital manipulations.

I achieved a silvery tone in my photographic art which reflected the silver used in silk fabrics and embroidery for Imperial garments. 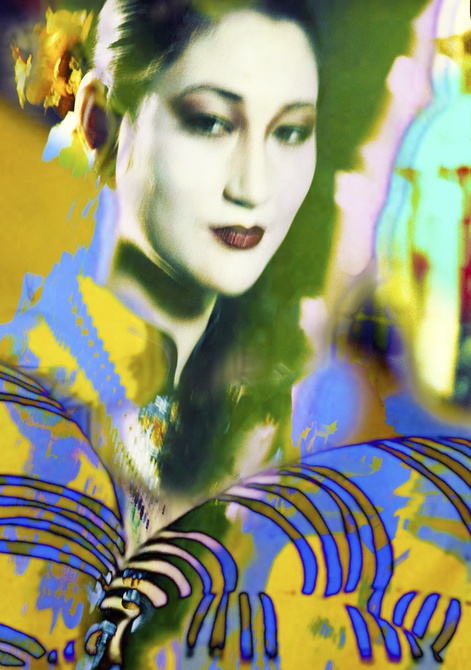 Editorial assignment or Art&Antiques magazine featuring some Imperial garments from the Last Emperor & Empress of China.

I researched the history of the garments and learned that the colour Yellow was only permitted to be worn by the Imperial family.

I created my photographic art by combining my film photograph of the brightly coloured yellow embroidered garment with digital designs in blue as complimentary colours. Photographed in my New York studio. 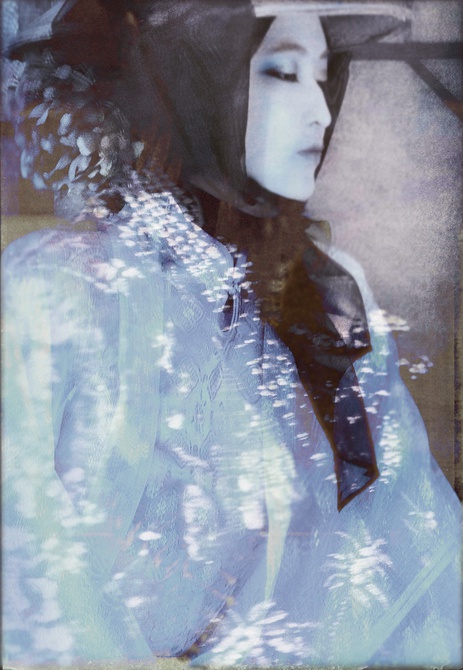 I researched the story of WanRong, the last Empress of China, and wanted to portray her time just after she was exiled, along with the Emperor PuYi, from the Imperial Palace in the Forbidden City, but before she was captured and imprisoned. It was a harsh time for her and she became addicted to opium.

I found a modern reproduction of a garment that seemed to have the right look of the era and I had the model wrap a black scarf around her head to symbolise the Empress' loss of title and status. I photographed this image in my studio in Christchurch, New Zealand. 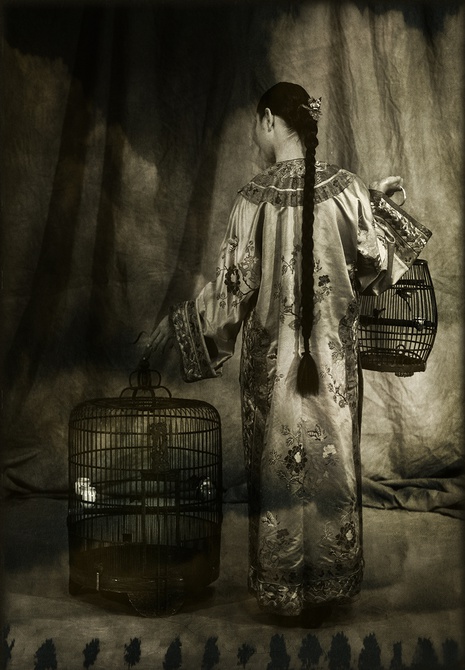 Title
The Seller of Caged Birds

Title
The Seller of Caged Birds

I used a heavy drape as a background for this portrait of a young Chinese woman holding the bird cages. Photographed in my New York Studio... I wanted a vintage look similar to the portrait photographers of the early 1900's.

I achieved the aged look by sepia toning the final photographic art. 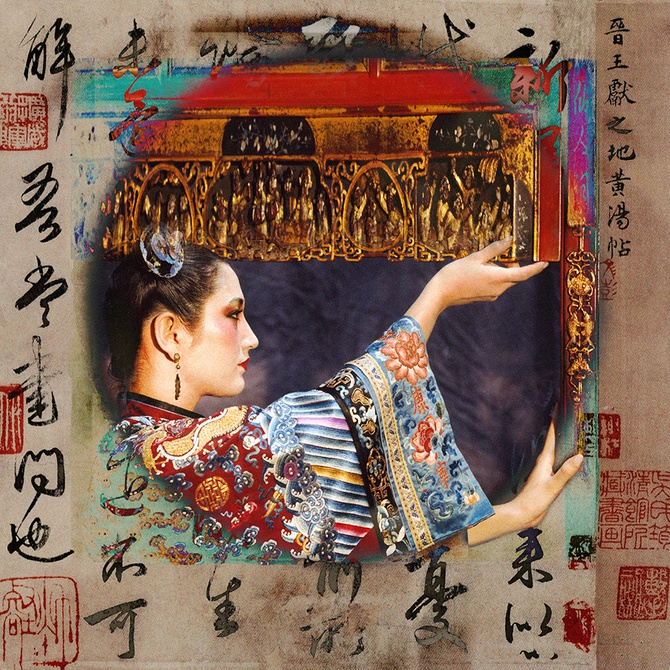 I was fortunate to have had the opportunity to photograph a few actual garments from the Last Emperor of China (PuYi) who was exiled along with his wife, WanRong, from the Forbidden City by the invading Manchurian forces.

I was intrigued by the embroidery that covered the entire garment, in particular the hundreds of tiny knots (no larger than the head of a pin) that became known as "The Forbidden Stitch". I wanted a close-up of the stitch, but also the beautiful model's face.
I photographed the garments in my New York studio.

I combined my analogue film photograph with images of antique Chinese scrolls to create the final photographic art. 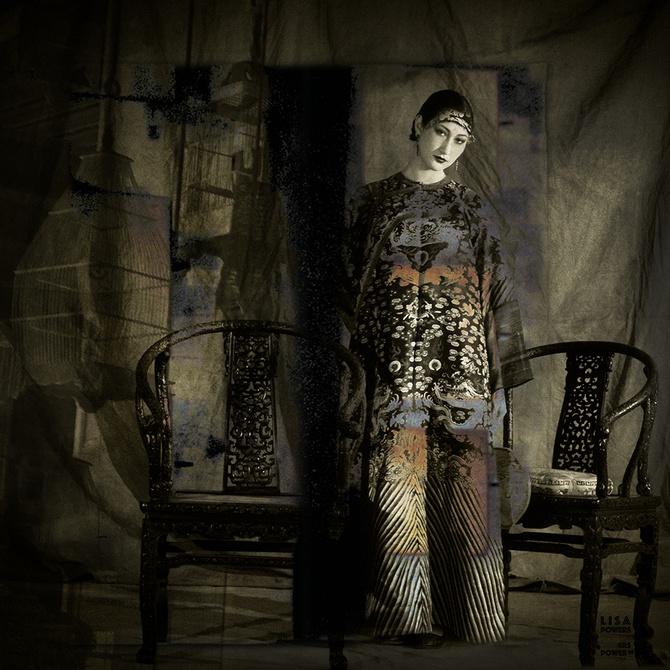 I was hired to shoot several garments, furnishings, and accessories from the Qing Dynasty of China, which ended in 1912 with the exile of the Emperor PuYi and his wife, WanRong.

Originally, I wanted to photograph the garments on a male Asian model, but later decided to use a female model. This shifted the focus of the shoot to the Empress WanRong, rather than Emperor PuYi. I researched WanRong and discovered that she had a tragic life and died in prison after her husband, PuYi, fled for his life leaving her behind. Her remains were never found.

I experimented mixing my analogue film photographs with digital after-effects to achieve a vintage, aged look commensurate with the period.