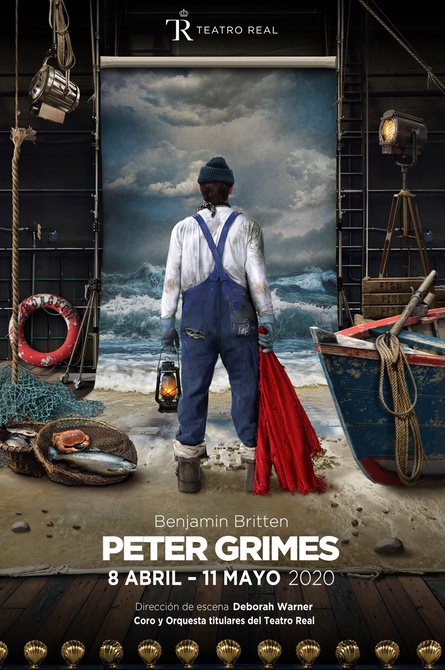 I was asked to create an image proposal for the Teatro Real
(Royal Madrid Opera) 2O2O-2O21 season brochure, poster and communications materials for the opera, ‘Peter Grimes’ by Benjamin Britten.

Taking inspiration from ‘Wanderer above the Sea of Fog’ ‘by
the German Romantic artist Caspar David Friedrich, I created a backstage theatre setting, utilising a painted cloth backdrop as well as theatrical paraphernalia to create the visual narrative.

In the foreground, a mariner stands on a beach, his back to the viewer as he gazes out on an angry sea, signifying man’s insignificance against the force of nature, a mere man as he
faces a wall of adversity. It acts as a metaphor for the storm that lies ahead of him, both from the literal elements as well as the resentful villagers from ‘The Borough’.

He is lost in thought and self-reflection as he contemplates
the recent events and his uncertain future.

In one hand he clutches a red jumper, signifying the missing apprentice; in the other, he holds a fisherman’s safety lamp representing the light that still burns inside him as he yearns
for his lost friend. 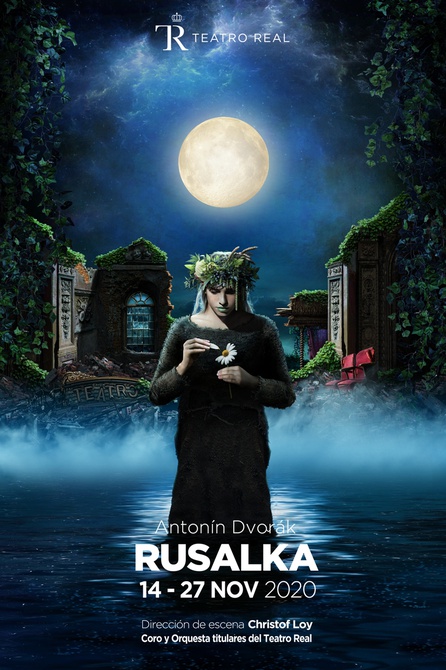 I was asked to create an image proposal for the Teatro Real (Royal Madrid Opera) opera, ‘Rusalka’ by Antonín Dvořák to used for their brochure, posters and communications materials.

From Slavic pagan folklore, a Rusalka (Spirit of the Lake) is a mythological spirit of nature or ‘nymph’, imagined as a beautiful young maiden inhabiting rivers and woodland, often mischievous toward mankind.

Taking inspiration from the Director’s guidelines of an impoverished Rusalka and the theatrical setting of an abandoned/ruined theatre I centred the main character of Rusalka within a lake bathed in moonlight, to reflect her celebrated aria to the moon - the ruins of an old theatre as the backdrop.

To represent her tragic love for the young Prince, she is in the
act of ‘He loves me. He loves me not.’ whilst picking a single petal
from an ox-eye daisy. 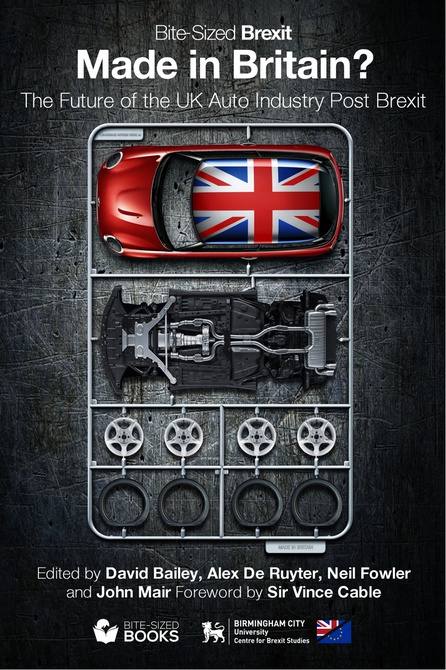 I was commissioned by Bite-Sized Books to create the covers
for their series of ‘Bite-Sized Brexit’ books on some of the key issues surrounding Brexit, the UK's divorce from the European Union. This example, ‘Made in Britain? The Future of the UK Auto
Industry Post Brexit’ is an analytical investigation by industry experts into the ramifications for the British Auto Industry post Brexit.

The concept for the book cover is based on the Mini, a perfect example of how the ‘British’ car industry is no longer British. Built in the UK the Mini is perceived as quintessentially British, you can even buy it with a Union Jack painted on the roof! The truth is, it’s owned by German car manufacturer BMW; in fact 6O% of a mini is sourced from the EU and screwed together in the UK. The crankshaft is from France, the engine is from Germany, the headlights are from Spain, the rear lights are from Poland, the steering wheel is from Romania, the wheels are from Czech Republic and the tyres are Italian.

The illustration shows the Mini as a plastic model kit, signifying the kit of parts that are fitted together at the Cowley Mini manufacturing plant in Oxford.

Extremely positive feedback from the authors and publisher 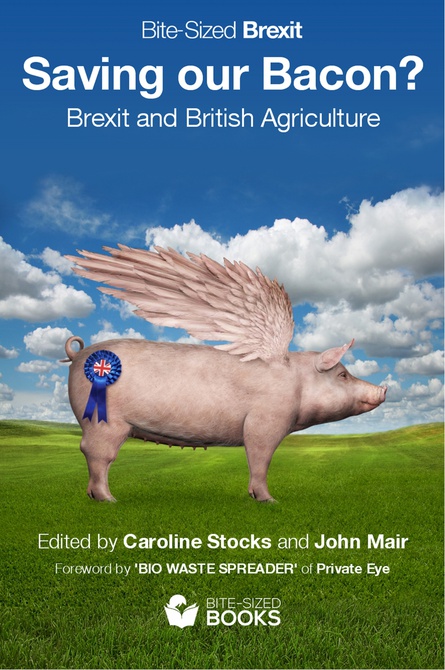 I was commissioned by Bite-Sized Books to create the covers
for their series of ‘Bite-Sized Brexit’ books on some of the key issues surrounding Brexit, the UK's divorce from the European Union.

This book is an analytical investigation by agricultural experts into the ramifications for the British Farming Industry post Brexit. The British government maintains UK farming and agriculture will be better off after Brexit yet the experts disagree and predict it will be a catastrophe for British farmers.

The concept for the book cover is based around the title 'Saving our Bacon?' meaning to rescue someone from a difficult situation or harm and the well known idiom, "pigs might fly“, often used for humorous effect to mock an over-ambitious statement.

Extremely positive reaction from the authors and the publisher 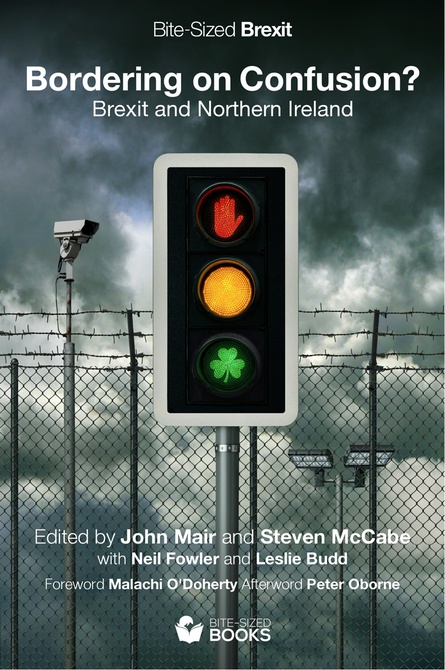 I was commissioned by Bite-Sized Books to create the covers
for their series of ‘Bite-Sized Brexit’ books on some of the key issues surrounding Brexit.

This ‘Bite-Sized Brexit’ book is an analytical investigation by political experts into the ramifications for Northern Ireland
post Brexit.

Solving the issue of the Irish border could still derail the Brexit process, creating significant economic damage to both parts of the island. It could also undermine the peace achieved by the 1998 Good Friday Agreement.

My concept was a Traffic Light with the red stop light represented by the red hand of Protestant Ulster; the amber representing the Protestant Orange Order in Northern Ireland and the minority Protestants in the Irish Republic, and the green light, a shamrock, symbolising the Irish Republic and the minority Roman Catholics in Northern Ireland. Set against a doom laden sky, security fence, cameras and security lights signifying a ‘hard border’ and a potential return to the troubles and conflict of the past.

Extremely positive response from both the authors and publisher 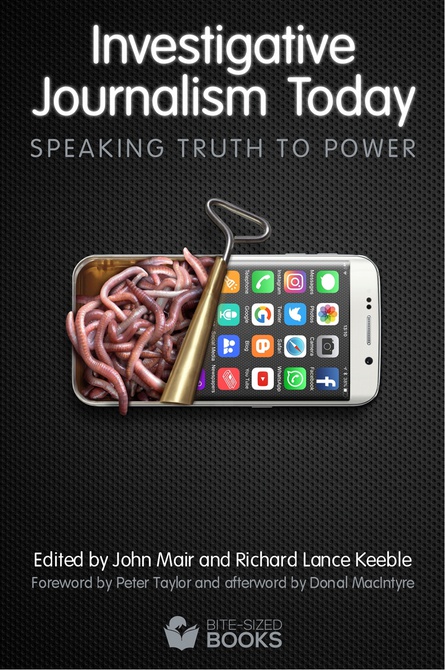 I was commissioned by Bite-Sized Books to illustrate the cover
of their book, ‘Investigative Journalism Today - Speaking Truth
to Power’.

The brief was to portray the negative effect online media has on investigative journalism and the subsequent consequences for truthful reporting of events.

My simple concept is based on the well known English idiom - ‘opening up a can of worms’...

Extremely positive response from the authors and client 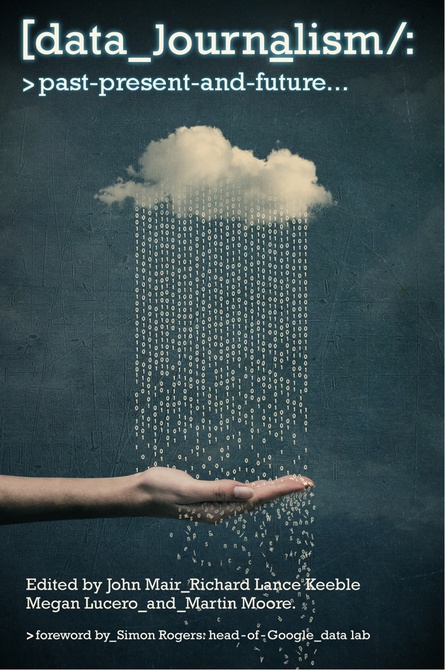 I was commissioned by Abramis Publishing to illustrate the
cover of their book, ‘Data Journalism: Past Present and Future’.

The brief was to portray data journalism, an area of investigative journalism that uses, examines and converts relevant statistical digital data in order to provide a deeper insight into news stories.

My concept illustrates digital data transforming into textual content via human interaction - using raining zeros and ones (the DNA of data) falling onto a hand, transforming into a cascade of letters of the alphabet.

Extremely Positive response from the authors and publisher 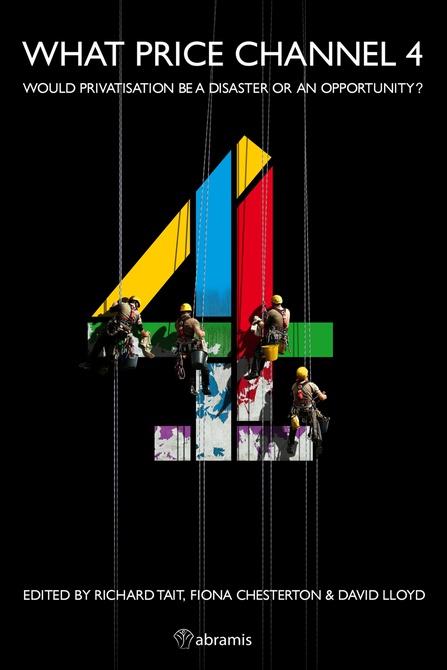 Would privatisation of Channel 4 Television be a disaster or an opportunity? This book,
by Abramis publishing, discusses the conflicting views of the British Government, that believes privatisation will secure the TV channel's future, and Channel 4 that thinks it will destroy its unique role in British broadcasting.

My idea was to represent the channel being spruced up, made ready for sale. For the past 2O years, the channel has been using a sterile all white 4 logo instead of the original multi coloured version that represented the diversity of the channel’s original content remit.

My illustration shows maintenance technicians abseiling
down the face of the Channel 4 logo, as they carry out cleaning
and restoration work, removing the worn-out white cladding
of the existing logo, to expose the original multi-coloured facade
and ultimately, revealing Channel 4’s true colours.

Extremely positive feedback from both the authors and publisher 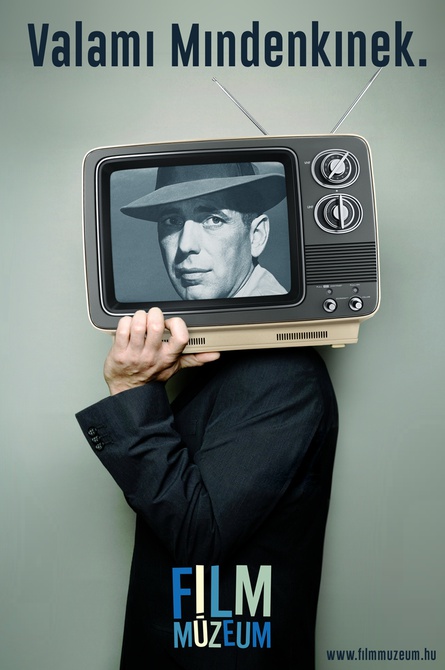 Title
Film Múzeum - Something for Everyone

Title
Film Múzeum - Something for Everyone

My brief was to create a Film Múzeum brand awareness campaign for bus shelter and Metro posters, promoting the new look and reassuring their existing loyal audience that all the popular classic series and movies they know and love remained,
at the same time engaging with a new, younger audience by using imaginative retro visuals.

The design had to include examples of Film Múzeum content
and their tag-line ‘Valami Mindenkinek’ (Something for Everyone).

My solution was to create a series of images of a person holding an old portable TV on their shoulder, the screen filled with the faces of film stars from the golden years of Hollywood. The example shown here is Humphrey Bogart. Others in the series included Marilyn Monroe, Marlene Dietrich, Rita Hayworth, Charlie Chaplin and Clark Gable.

The client was extremely pleased with the results 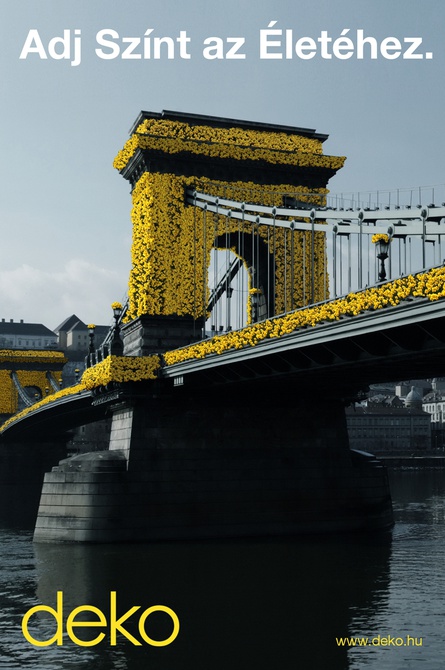 Title
deko - Add Some Colour into your Life

Title
deko - Add Some Colour into your Life

Deko, a popular Hungarian TV channel dedicated to lifestyle, interior design, and home improvements wanted to create a spring ad campaign, to build on the success of the channel’s fresh new yellow branding.

Taking their brand tag-line ‘Adj Színt az Életéhez.’ (Add Some Colour into your Life) as inspiration, the client required a set of compelling visuals that communicated spring as the time for ‘reinvigorating your life and your surroundings’.

The proposal was to feature recognisable yet gloomy scenarios, each transformed by adding a touch of Deko inspiration, with Deko’s new, bright yellow brand colour used as the constant theme representing spring had arrived.

The launch campaign coincided with the Easter Festival when it’s
a Hungarian tradition to give yellow daffodils as a gift. Using this tradition as my inspiration, my visual depicts the Széchenyi Chain Bridge, a national landmark spanning the River Danube between Buda and Pest, adorned in yellow daffodils.

Extremely successful campaign - voted campaign of the month by ad agencies. The client was extremely happy with the results. 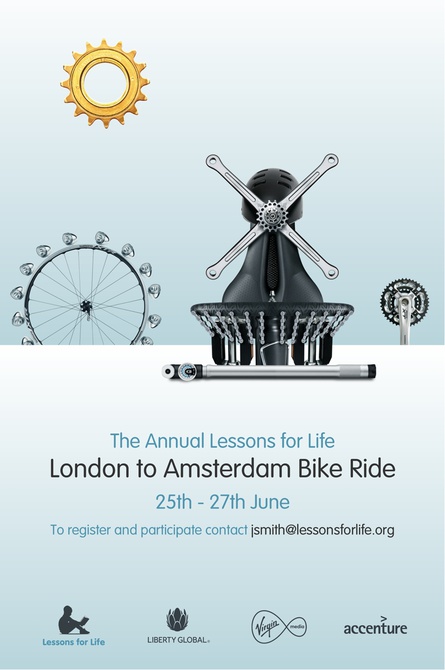 The annual ‘Lessons for Life Bike Ride’ has become an essential fund raiser for the Lessons for Life Foundation, with over 4OO riders from the US, Europe and the UK cycling over 12O miles from London to Amsterdam. Participants collectively raise an average of over £1 million, helping the charity provide 1O,OOO African children a school education.

I was commissioned to create all the communication materials
to promote the event, based around a core visual concept that could be easily translated into several languages.

My solution was an extremely simple one - I created a landscape composed from bicycle parts that represented the starting point, The London Eye in London and finishing point, the De Gooyer windmill in Amsterdam. 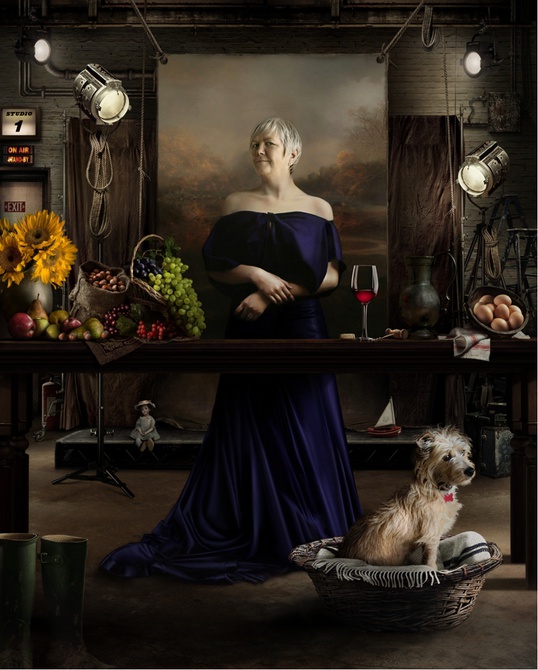 Portrait commissioned as a celebration of Jo’s life.

The studio setting is intentional, as Jo spent her career working for the BBC in television Production. A composite of hundreds of separate photographic assets, each element representing her passions, her past, and her persona.

Client was delighted with the end result 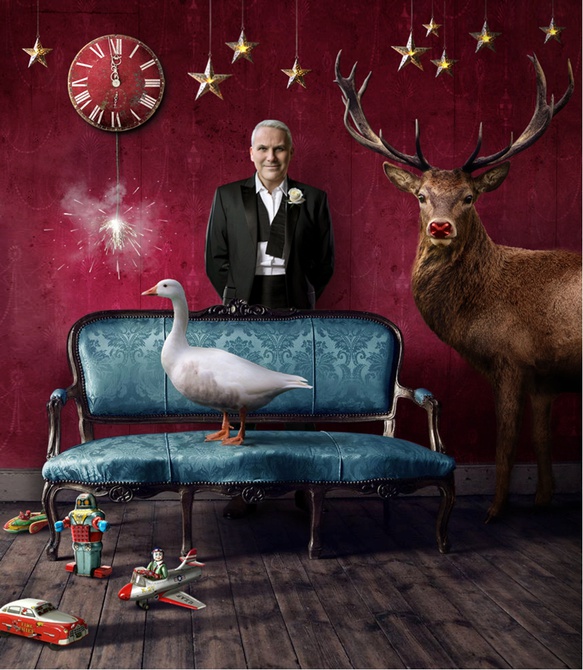 Every year I send out a personalised Christmas and New Year eCard to clients and associates.

This version shows me in evening attire, behind a ‘welcoming chaise lounge’; a goose, the traditional English Christmas meal, as old as the pagan winter solstice festival. A deer with a red nose; a few boys toys scattered across the floor and a clock counting down to the new year.

It always receives an excellent response 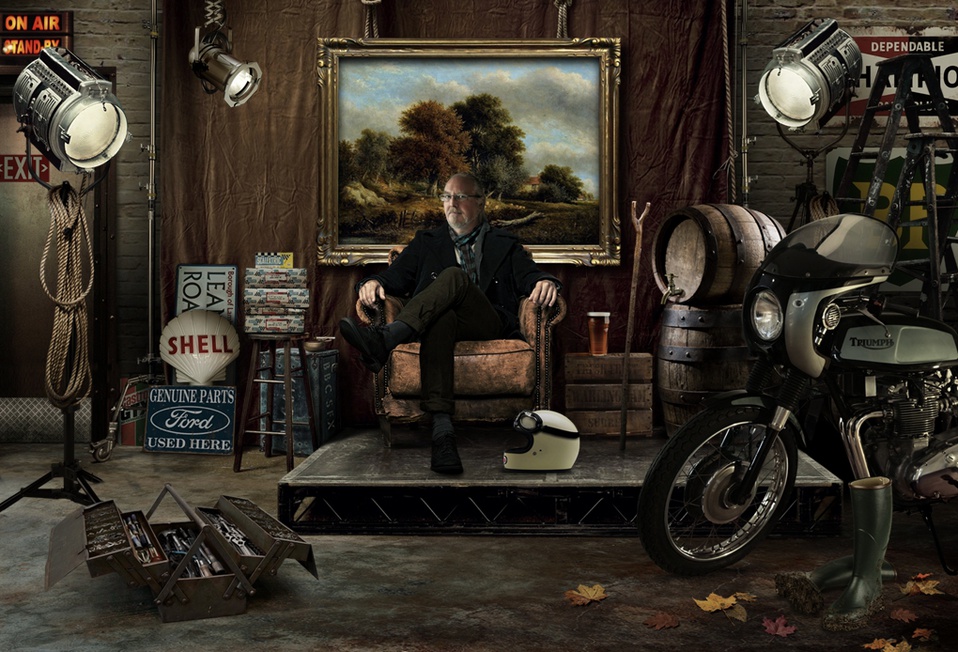 A composition of elements that reflect John's life and loves

Extremely happy with the result