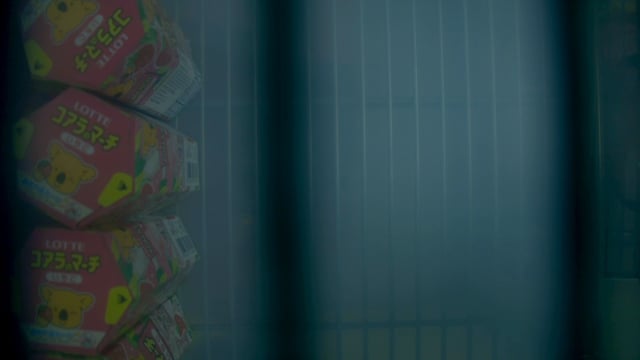 Create a title sequence for an existing movie. No limit on stylization or length, but had to incorporate at least the star’s names and the name of the movie.

The movie follows the story of two Americans in Tokyo. It's about isolation, experiencing a disconnect from your surroundings and feeling trapped in a relationship. It’s also a movie about finding love (and losing it). I came up with the idea of centering the sequence around an asian supermarket. There, I would easily be able to introduce the audience to the setting of Japan through Japanese food labels. I began filming around the store, but quickly gravitated towards the fish counter they had in the back. Something about the fish struck me. I chose to focus most of my filming on these fish, as the way the fish were stuck in their tank, (with an impending move-out date) really resonated with the characters' stories in the movies. By showing an empty tank at the end, I was able to echo how the characters have to leave their temporary refuge and their newfound lovers at the end of the movie. I gravitated towards the wonky, hand-written lettering from Stanley Kubrick’s Dr. Strangelove(1964). I was also heavily inspired by the close up, abstract shots used in Saul Bass’sSequence for Grand Prix (1966). I ended up choosing a sound that felt a bit like elevator music. This referenced the elevators in the Japanese hotel that are featured strongly in the movie. I also felt that the idea of getting on an elevator was essentially a microcosm for the whole movie.

The result was a sequence that alludes to the setting and plot of Lost and Translation while capturing the melancholy, impressionistic feel of the movie.