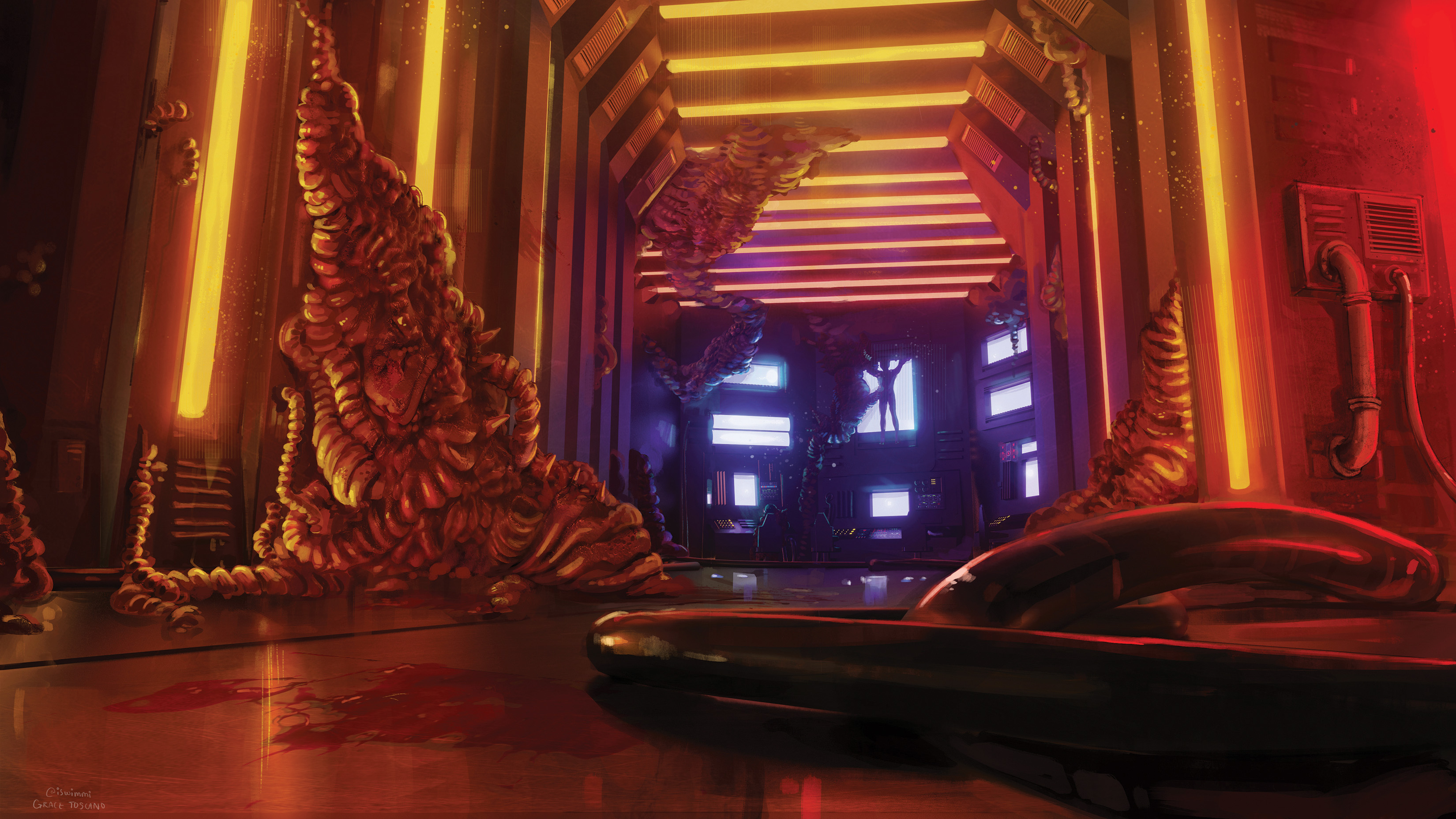 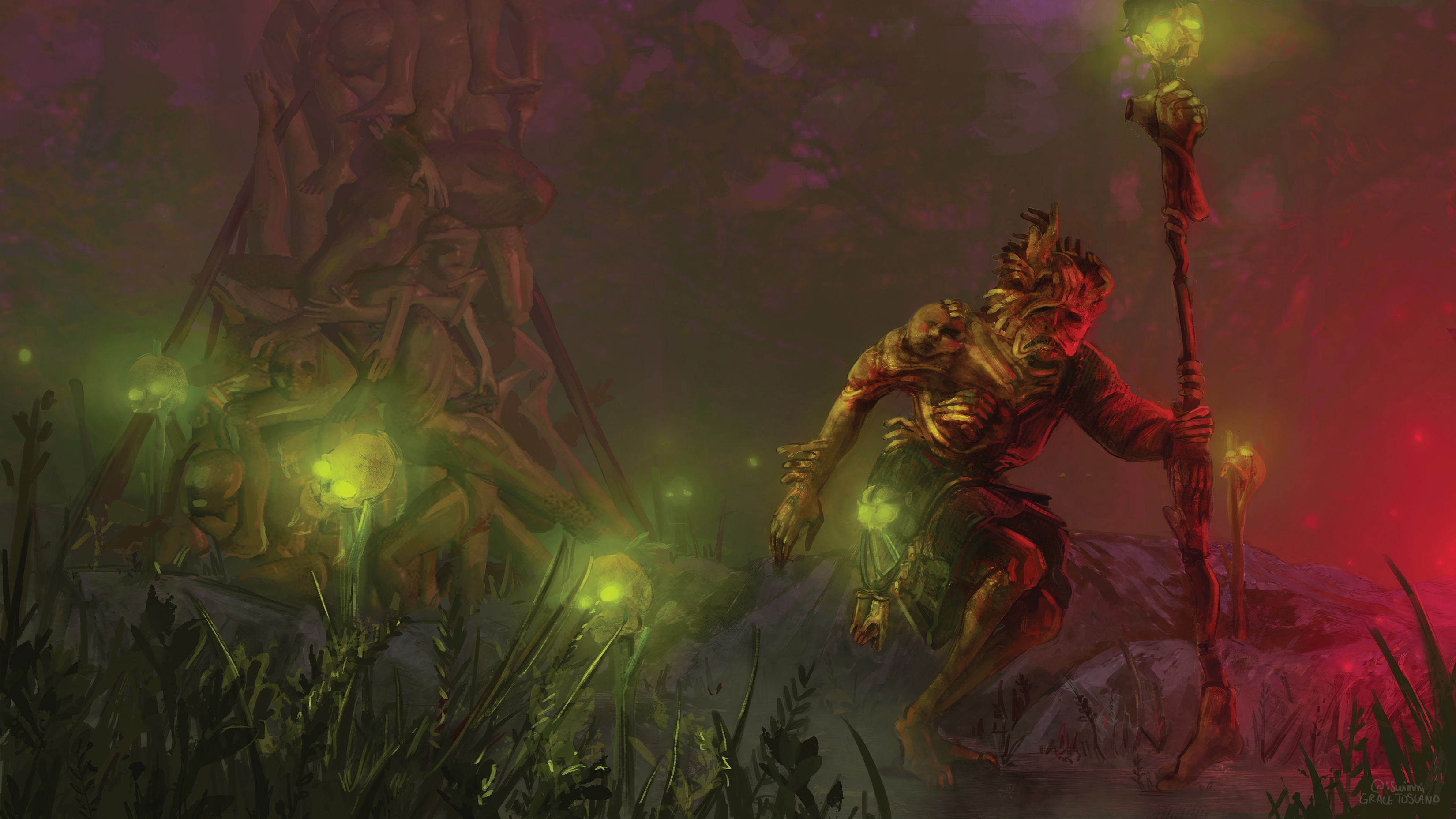 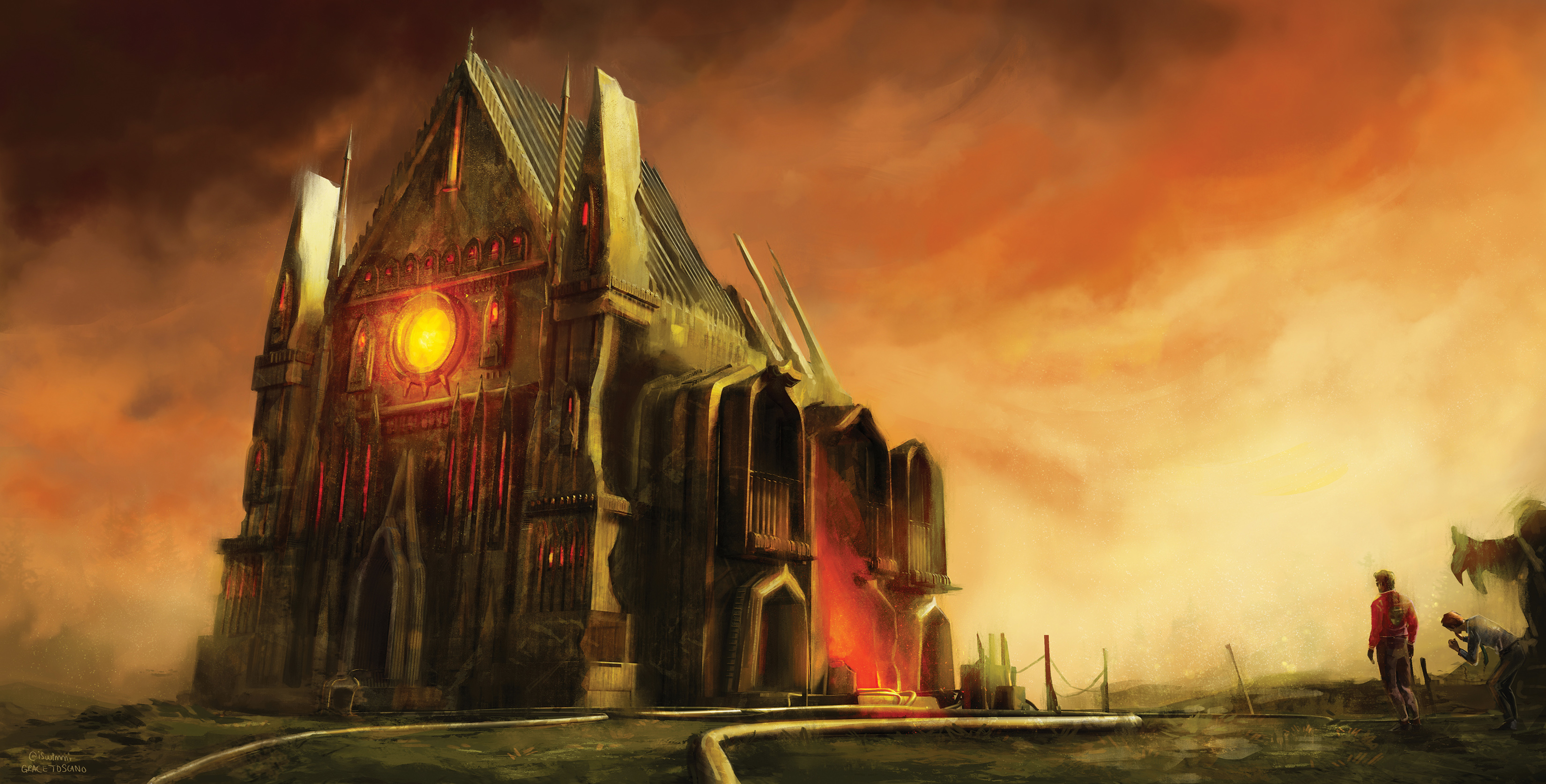 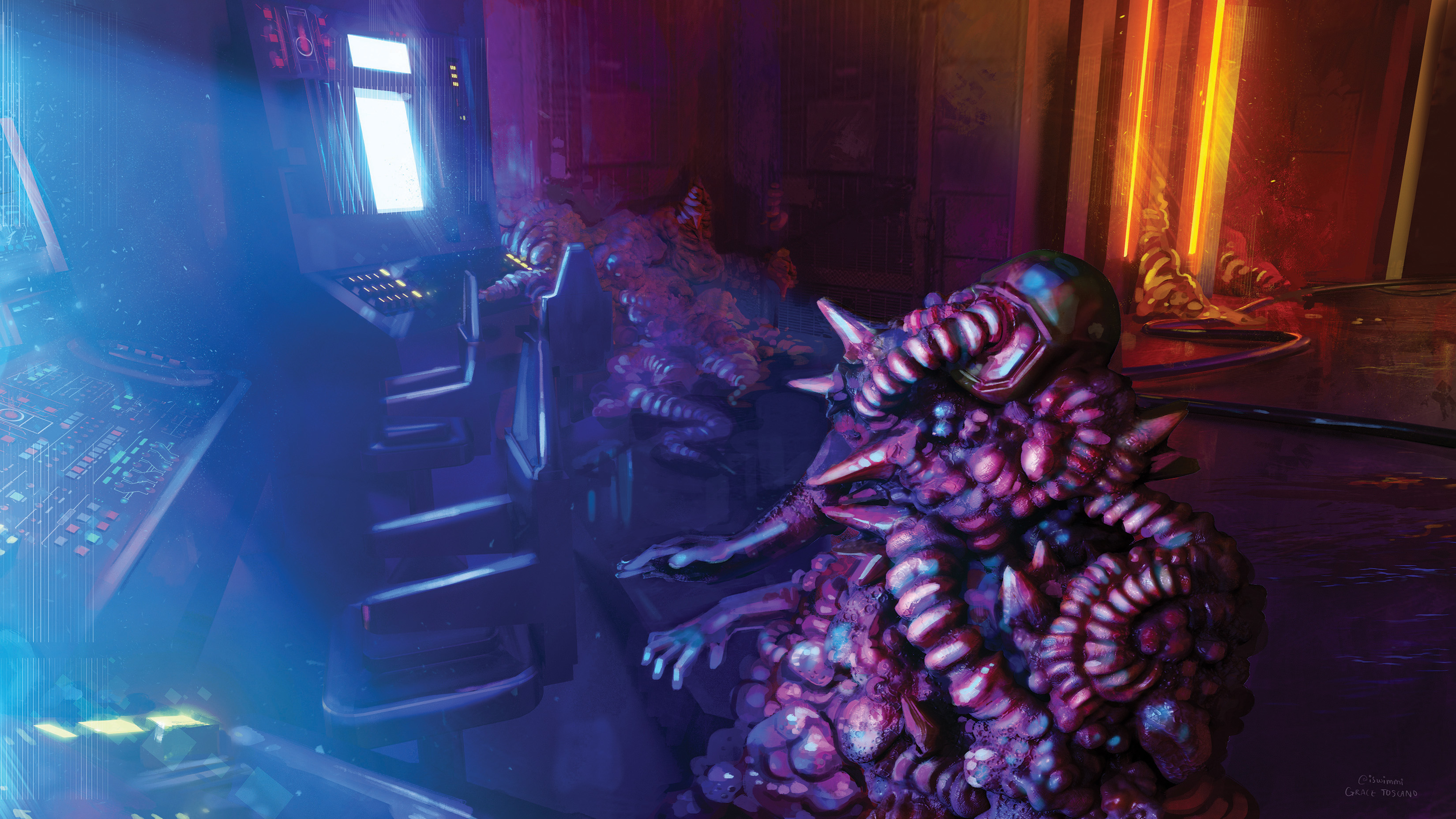 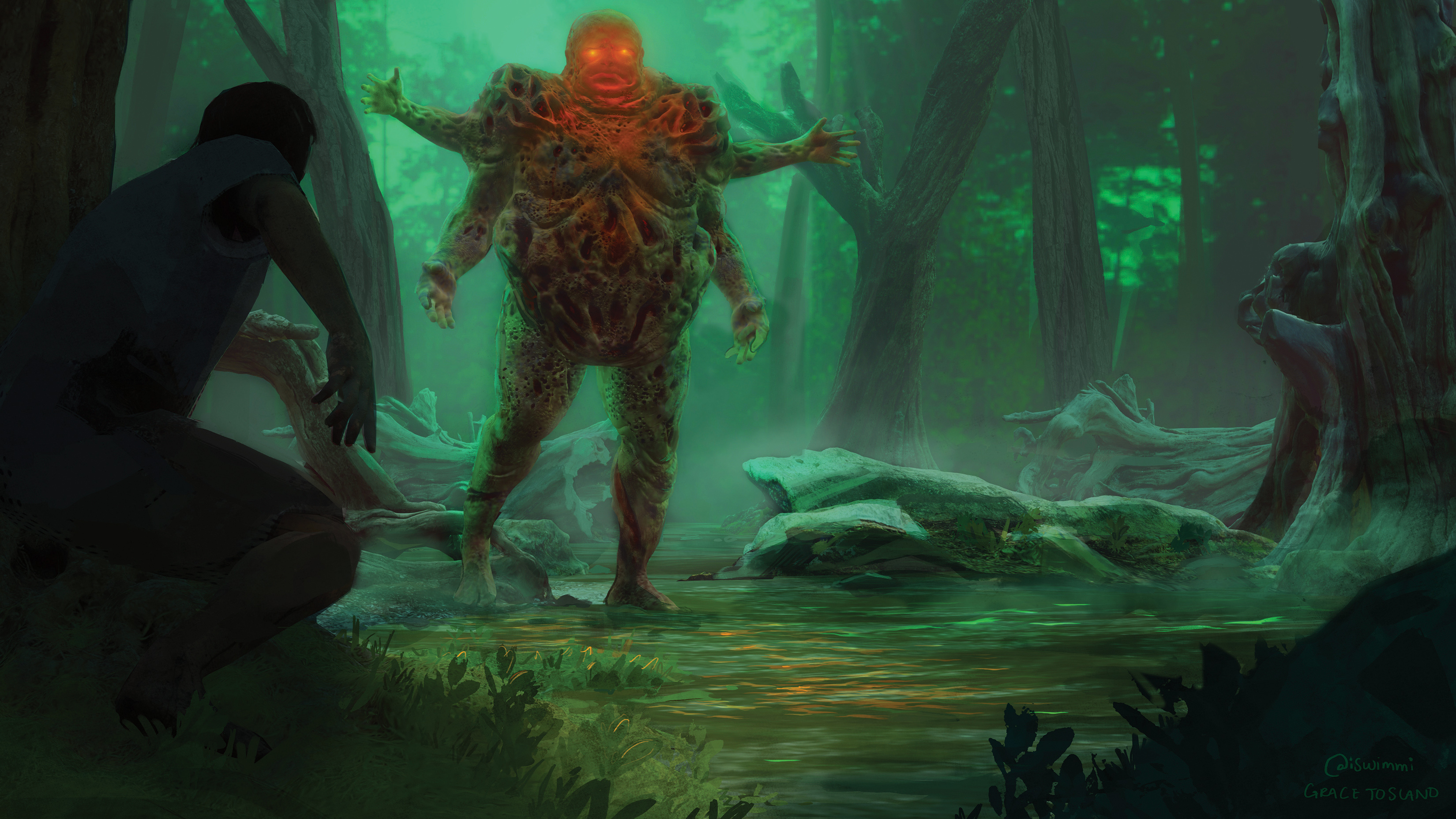 These illustrations are each concept pieces for several projects. With all of them my goal was
to build out these worlds and create interesting atmospheres and also, to be well researched
and include interesting designs.
“Ship Hall” and “Ship Deck” each belonged to the same sci-fi horror project. I was
conceptualizing a four-player co-op game where the premise was a space ship had disappeared
on an unexplored isolated planet. A team of four arrives to explore what happened and are
hunted by an alien who killed the previous crew. The two illustrations are environment
concepts for the abandoned ship that the crew explores. The main goal with was to create a
potential environment that the player could explore and be able to infer what had previously
happened.
For the illustration “Baba Yaga” I wanted to design a version of the Baba Yaga folktale that was
much more focused on the horror elements of the story. I wanted to take elements from the
original folktale and put a body horror spin on them. Overall, the goal was to make an
interesting character design while still having the folktale in mind.
“Strange Church” is an environment design that depicts an abandoned church where unusual
events have been happening. It later becomes a research base for cosmic horrors. I wanted to
combine the classic gothic church architecture with the idea of cosmic horror and a slight sci-fi
edge in order to create an interesting environment to be explored.
“Sinker” is a creature design where I mainly focused on formal aspects in order to create an
interesting and unsettling creature on might encounter in a horror game. My goal was to make
something larger and more intimidating compared to my previous creature designs

My creative process for all of these illustrations is similar. For each project, I start by researching visual elements and creating mood-boards for reference. I then sculpt the base structure of environments in Blender and creatures/organic objects in Zbrush. After digitally sculpting the base forms, I bring them into Photoshop to paint more detail and dynamic color.

For “Ship Hall” and “Ship Deck” I wanted to create a unique and unnerving atmosphere. I took influence from giallo films such as Suspiria (1977) and Inferno (1980) to create this feeling through extremely saturated lighting. I also wanted to show how time had passed on the ship through the growing of an alien substance in the aftermath of an attack. I thought the combination of organic matter with the hard edges of a space ship would make for interesting visuals.

For the “Baba Yaga” character illustration, I had previously made a character sheet for Baba Yaga, showing both the front and back of the creature’s design. I wanted to put her into an environment to fully illustrate what an encounter with this creature would be like. Since the Baba Yaga legend includes that she eats children, I thought it would be interesting to illustrate this though showing how the kids she devours become a part of her. Her body is mounds of melded flesh with human body parts peeking out to imply what once was. To get this look, I referenced multiple figures and folded flesh images along with posing my own hands and incorporating that into Baba Yaga.

For “Strange Church”, I conceptualized the idea and gathered gothic architecture references along with sketching multiple thumbnails and building breakdowns. After that, I modeled the church in Blender. Once I rendered the structure in Blender, I took it into Photoshop and painted details. I also worked on perfecting the alien-like lighting coming out of the church to indicate something strange was happening. I spent a lot of time figuring out the sky because I wanted it to look realistic, but at the same time somewhat unnatural with saturated color that I love to include in my work. With this, I felt it pulled the atmosphere together.

With “Sinker”, I created a detailed sculpt of the creature in Zbrush. I played with texturing techniques and took inspiration from mushrooms/fungi for the creature’s skin. After developing the creature to my satisfaction, I created a character sheet. I then blocked out a swamp environment in Blender and took it into Photoshop to paint out and perfect the lighting. I wanted the creature to be very intimidating, so I cast it in shadow and put an extreme light behind it. This also created contrast to pull more focus towards the creature. I positioned the figure hiding in the foreground to create a point of entry for the viewer. I wanted to give the feeling that the viewers themselves are hiding from this creature.

I found these pieces to be successful in my goals for each of them. Feedback from clients was uniformly positive. The main feedback I received was to add more detail and contrast in areas of the illustration. I revised those aspects and was very happy with the outcome. Through the creative process, as well as from feedback and revisions, I learned a great deal and have been able to improve my work moving forward.