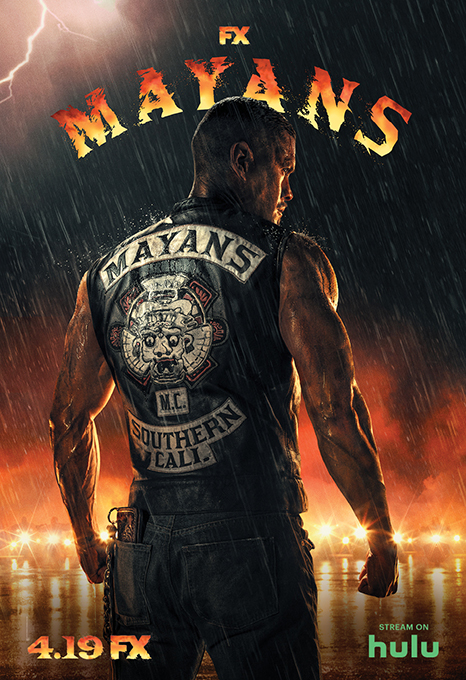 The fourth season of Mayans centers around the two brothers viewers know and love, EZ and Angel, pitted against each other in an epic battle for their dad’s attention. The characters are forced to deal with a family curse that is a direct result of the generational suffering brought on by their father. All of the war in this season is framed in the four elements- fire, water, wind, and earth. There is a storm coming, the winds of change are blowing in, and it is the Sons of Anarchy bringing war to the Mayans.

The client wanted the art to be photographic, raw, and real and to feature either EZ or Angel. They asked us to use a melancholic color pallet that embodied the season’s dark, action-packed violence and intensity. Lastly, they wanted to see how macro we could get while still expressing violence.

We chose to focus the art on EZ’s transition to the dark side in this season. Our goal was to highlight EZ’s choice to accept the family curse and his true evil nature. We wanted to visually depict the theme of war that reoccurs throughout this season because EZ and Angel are part of a group of people who want to set the world on fire. We used dark colors to portray the art through the eye of the night. Our goal with juxtaposing EZ’s stance against the oncoming riders in the distance was to communicate the violence within EZ that will be released on the Sons of Anarchy. We used rain and the fiery color of the light coming from the motorcycles to embody the war framed by nature and the turbulence of the environment around the characters.

The client was thrilled with our key art’s utilization of colors, elements, and EZ to express the violence and turmoil of the season. In addition, they were pleased with how we distinguished the key art from past seasons by making the art raw and photographic. The client is currently using the key art in a widespread campaign to generate buzz for returning viewers and pique the interest of audience members who have never seen the show before.