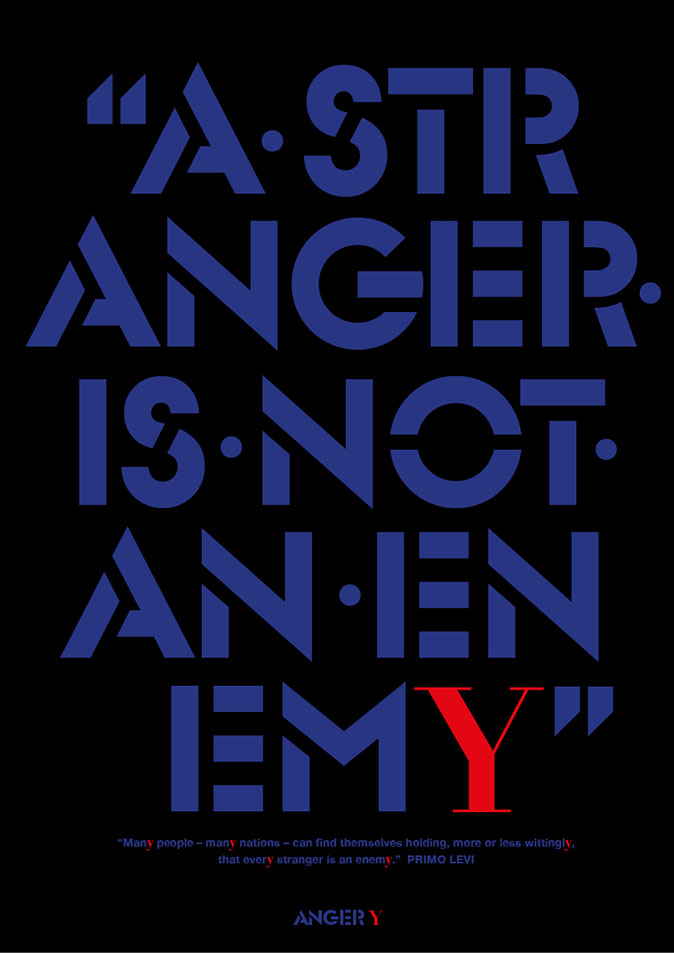 The poster was designed in response to the ever growing hostile responses to people of migration and of different ethnicity.

After remembering quotes from Primo Levi who was concerned about these issues and whose writings unfortunately are as relevant today as when first written, I had the idea to highlight a single letter to express the vulnerability of certain people or peoples.

From this idea the poster seemed to design itself. I pushed the type as large as I could in a portrait format which meant breaking the words and in a significant way the word anger came out of the word stranger.

I chose two elegant but aesthetically different fonts, Glaser Stencil and Didot to illustrate the difference.

Gradually it became obvious to differentiate the letter Y as the ‘rogue’ letter in the quote as it sounds the same as the actual word 'why' which is the underlying assertion in Levi’s writings.

I sat back the majority of the text in dark blue on a black background which made the letter Y stand out more.

This meant the eye is initially drawn to the final letter of the quote rather than the first.
This tension over the navigation of the eye within this design hopefully in a creative sense echoes the tensions of those who are singled out and treated unfairly.

Nothing is beyond critique and hopefully this poster can join the challenge to opinions conveyed by powerful bodies pursuing isolationist and racist narratives.