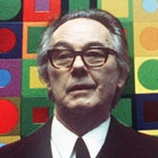 (1906 - 1997) Victor Vasarely is internationally recognized as one of the most important artists of the 20th century. He is the acknowledged leader of the Op Art movement, and his innovations in color and optical illusion have had a strong influence on many modern artists. In 1947, Vasarely discovered his place in abstract art. Influenced by his experiences at Breton Beach of Belle Isle, he concluded that "internal geometry" could be seen below the surface of the entire world. He conceived that form and color are inseparable. "Every form is a base for color, every color is the attribute of a form." Forms from nature were thus transposed into purely abstract elements in his paintings. Recognizing the inner geometry of nature, Vasarely wrote, "the ellipsoid form... will slowly, but tenaciously, take hold of the surface, and become its raison d'etre. Henceforth, this ovoid form will signify in all my works of this period, the 'oceanic feeling'...I can no longer admit an inner world and another, an outer world, apart. The within and the without communicate by osmosis, or, one might rather say: the spatial-material universe, energetic-living, feeling-thinking, form a whole, indivisible... The languages of the spirit are but the supervibrations of the great physical nature." Vasarely was born in Pecs, Hungary in 1906. After receiving his baccalaureate degree in 1925, he began studying art at the Podolini-Volkmann Academy in Budapest. In 1928, he transferred to the Muhely Academy, also known as the Budapest Bauhaus, where he studied with Alexander Bortnijik. At the Academy, he became familiar with the contemporary research in color and optics by Jaohannes Itten, Josef Albers, and the Constructivists Malevich and Kandinsky. After his first one-man show in 1930, at the Kovacs Akos Gallery in Budapest, Vasarely moved to Paris. For the next thirteen years, he devoted himself to graphic studies. His lifelong fascination with linear patterning led him to draw figurative and abstract patterned subjects, such as his series of harlequins, checkers, tigers, and zebras. During this period, Vasarely also created multi-dimensional works of art by super-imposing patterned layers of cellophane on one another to attain the illusion of depth. In 1943, Vasarely began to work extensively in oils, creating both abstract and figurative canvases. His first Parisian exhibition was the following year at the Galerie Denise Rene which he helped found. Vasarely became the recognized leader of the avant-garde group of artists affiliated with the gallery. In 1955, Galerie Denise Rene hosted a major group exhibition in connection with Vasarely's painting experiments with movement. This was the first important exhibition of kinetic art and included works by Yaacov Agam, Pol Bury, Soto, and Jean Tinguely, among others. During the 1950's, Vasarely wrote a series of manifestos on the use of optical phenomena for artistic purposes. Together with his paintings and Vasarely prints, these were a significant influence on younger artists. According to the artist, "In the last analysis, the picture-object in pure composition appears to me as the last link in the family 'paintings,' still possessing by its shining beauty, an end in itself. But it is already more than a painting, the forms and colors which compose it are still situated on the plane, but the plastic event which they trigger fuses in front of and in the plane. It is thereby an end, but also a beginning, a kind of launching pad for future achievements."