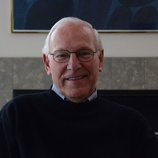 Richard was raised on a farm near Kingfisher, Oklahoma where his family survived both The “Dust Bowl” and “The Great Depression.”

His independent design career began in Dallas in 1959, he then moved to New York City in 1963 and practiced there for 33 years (including five years at Gips & Danne and 12 years at Danne & Blackburn). After some time on Cape Cod, Massachusetts, he relocated the studio, residence, and Steinway piano to Napa, California in 2005. Among the handsome vineyards, he and his wife Barbara practice as DanneDesign.

Winner of many awards, and honored with the prestigious AIGA Medal, he remains active in design and music, and enjoys a busy speaking schedule around the United States.

In 1977, Dick was elected President of AIGA where he helped transition it from a New York-centric Club, to a National chapter-based organization. He then organized and served as Founding President of AIGA/New York – a critical step in the group’s evolution. 1974 had brought a meaningful election to AGI (Alliance Graphique Internationale) where he later served as President of AGI/U.S. for many years. He also taught at SVA, served on numerous boards, and lectured extensively.

He rallied to attend Oklahoma State University and the UCLA Graduate School of Design – while being focused on both design and music.

Danne's comments: “My professional career now spans six decades and I’m fortunate that design has taken me around the world. It all comes full circle now, and I deeply appreciate being named a Graphis Master.”